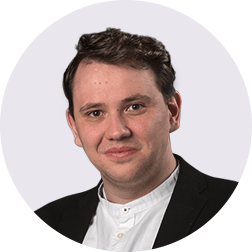 Martin Molan is the Chief AI engineer at Comtrade 360, overseeing the design and development of AI-related research initiatives and solutions.

Ten years ago, he began his career with Comtrade Group as an intern. He first became a software engineer and eventually the machine learning engineer at Comtrade Gaming. He led the development of several AI solutions, most notably an intelligent bonus advisor and a real-time platform monitoring tool.

When Comtrade 360 was established, he first took on the responsibility of an AI consultant before becoming the chief AI engineer. Currently, his role and research focuses on anomaly detection, anticipation, and digital twin creation methodologies. Besides Comtrade, he has collaborated as a researcher with CERN openlab, UCL center for AI, UNESCO International Research Center on Artificial Intelligence, College of Bologna and CINECA, Italy.